“Inherit the Wind” is based on the furor that erupted in 1925 when Tennessee schoolteacher John Scopes was prosecuted for introducing the subject of evolution into his public school classroom. The resulting “Monkey Trial” pitted the orator and Biblical scholar William Jennings Bryant against the brilliant defense attorney Clarence Darrow in a courtroom confrontation that attracted worldwide attention.

“Inherit the Wind,” by Jerome Lawrence and Robert E. Lee (not that one), skews some of the actual details of the trial and the surrounding brouhaha, but with a play this enthralling, who cares?  Every word counts: making plot points, revealing motivations or expressing philosophies, which it does without condescension.

Under Tom Frascatore’s direction, at once unobtrusive and commanding in terms of both characterization and staging, Holmdel Theatre Company does itself proud with “Inherit the Wind.”  For starters, they trust the material.  They plumb its depth without expanding its width, digging into it without gussying it up.

“Inherit the Wind” is a vehicle for two mature actors, who play Matthew Harrison Brady, based on Bryant, and Henry Drummond, the Darrow character.  In the course of Bertram Cates’s (Scopes) trial, the two men debate the Holy Bible’s precept of Divine Creation against the theory of natural selection as expounded in Darwin’s “On the Origin of Species.”  You can’t do the play – at least you shouldn’t – without two strong actors.  Michael Kroll (Drummond) and Ed Schiff (Brady) are both outstanding.  They build their characters gradually, from lower-key arrivals to the exciting courtroom confrontation.  So proficient are they that it looks casual, which of course it is not.  (Their contrasting appearance is a real asset.) 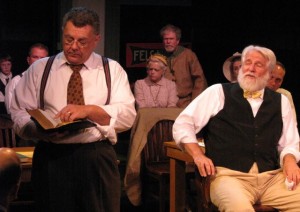 The play centers on the trial, but the scenes outside are essential to the small-town atmosphere, and what impresses at Holmdel is the ensemble work of the cast, in and out of the courtroom.  From pivotal supporting roles to those with a line or two, everyone hits the right note.  (When the defendant says he’s a schoolteacher, the shrill “Not any more, you ain’t!” still rings in my ear.)

The Scopes character is crucial.  If we don’t care about Cates, the stakes are diminished.  Volney Steffire plays him with a perfect blend of doubt and inner strength.  He makes us care.  As Rachel Brown, Cates’s girlfriend and daughter of the town’s oppressive minister, Michelle Budzyna might have been plucked off the street of that town and set down in Holmdel 85 years later. Her superb performance evokes the period in every particular, and when her father’s fundamentalist rant, delivered with fervor by Steve Bartlow, reduces her to a sobbing heap, we want to rush to comfort her.  (Why no one in the play does is a misstep. As I recall from other productions, Mrs. Brady offers some gesture, and as played sensitively here by Laurie Devino, she would.) 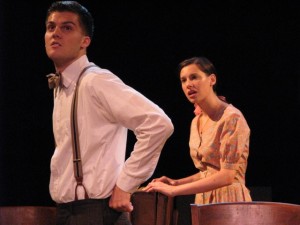 Others who skillfully convey the time and place include Dave Murray as a sympathetic deputy; 13-year old Jon Erik Nielsen, totally guileless as a student witness; and Dave Harris as the Mayor, protective of his town’s image.

The cynical reporter H. L. Mencken, who covered the Scopes trial for the Baltimore Sun, is represented by E. K. Hornbeck, played by Michael Irvin Pollard, who relishes the character’s mocking sarcasm.  It’s a harsh take on Hornbeck, making him more of an abrasive wise-guy than a sardonic wordsmith.  Mencken/Hornbeck is an agitator, to be sure; but this severe?  I’m not so sure.

Bill Motyka’s set design, with the judge’s bench set behind and above a section of the audience, is an apt symbol: Judgment from on high. The venerable Paul Nixon holds court up there, but on a speaker system?  C’mon, it’s 1925, and a key scene has the verdict being broadcast on the radio through a new-fangled device set up on the courtroom floor.  It really was the first radio broadcast from a courtroom, and most of the people had never even seen a microphone before.

My last “Inherit the Wind” was the 2007 Broadway revival with Christopher Plummer and Brian Dennehy.  Like some of the other critics, I was somewhat bored by the production.  Not last week at Holmdel, I wasn’t.