“Midsummer” not exactly a dream…

An historic first: a not-very-funny A Midsummer Night’s Dream – including the tradesmen’s “Pyramus and Thisbe.” No, really. Classic Stage Company assembled a potentially high-powered cast and saddled it with some strange choices, only a couple of which work. In a printed interview, director Tony Speciale notes without apparent irony that Shakespeare’s elegy to the arrival of summer offers a “bottomless” potential for interpretation.  Speciale didst reach too deep.

Bebe Neuwirth as Titania (center) and members of the company.

Dream begins on a serious note and soon turns fanciful. The opening scene, with Hermia’s father asking the Duke to sentence her to death if she refuses to wed Demetrius, paves the way for her flight into the nearby forest with Lysander, the man of her choice. Demetrius follows them into the wood, followed in turn by Helena, who dotes on Demetrius, who scorns her.

The potentially confusing ménage a quatre works visually when the two women and the two men are contrasting types. Here, Hermia is a slender brunette (Christina Ricci) and Helena (Halley Wegryn Gross) is a similarly constructed blonde. ‘Tis enough, but I defy anyone short of their mothers to differentiate between Jordan Dean’s Demetrius and Nick Gehlfuss’s Lysander, especially when they’re clad only in identical tightey-whiteys. The fetching foursome spend most of their rambunctious mêlée scene in their underwear, first grappling with one another and then asleep, sprawled out on stage. (Could I be the only one who found their near-nakedness distracting?)

Oberon, ruler of the forest, is served by Puck. That “merry wanderer of the night” is played by Taylor Mac, first in peppermint-striped tights and a fright wig, which at least differentiates him from Egeus, Hermia’s father, whom he played in the opening scene. Mac is fine as dad, but Puck? Besides being a bit overage for a sprite, he’s heavy-handed as well. Ad libs and interjections in Shakespeare rarely work, and Puck asking a front-row patron to deliver to him a mandolin that had been pre-set under his seat more befits Two Guvnors than Dream. Later Puck appears in a dainty frock and then as a cross between the Easter Bunny and Dumbo the elephant.  Innovating? More like reaching. 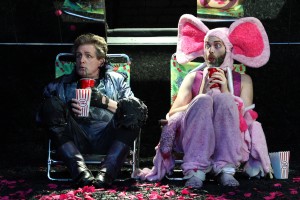 The roles of Duke Theseus and his reluctant fiancée Hippolyta, who bookend the play, are commonly doubled with the forest royalty Oberon and Titania. Both pairs of characters are well served by Anthony Heald and Bebe Neuwirth. The two are comfortable with the Shakespearian rhythms, pointing up the extent to which some of their cast mates are not.

Other cast-doubling, including Egeus and Puck, is more than curious. I’ve seen Titania’s fairie attendants played by young children, sexy women and even insinuating leather-boys (at Stratford, Ontario, of all places). But never before by Frances Flute, Robin Starveling, Tom Snout and Snug the Joiner. The “mechanicals” zip in and out of their personages to become Peaseblossom, Cobweb et al. The device may be intended to separate the ordinary from the fantasy, but we’ve suspended disbelief long before they overstate the message.

And what of Pyramus and Thisbe? The in-character actors aren’t trying to be funny, of course, but here the real actors aren’t either. Other than Steven Skybell, who plays Bottom with larky energy, the others make minimal effort to mine the scene’s comedy. It must be noted, though, that Thisbe’s suicide oration over Pyramus’s body, delivered with uncharacteristic solemnity by David Greenspan as Francis Flute, is actually quite moving, a la Juliet’s over Romeo. It’s one departure that works, as does having the whole cast divvy up Puck’s epilogue speech. Overall, however, while A Midsummer Night’s Dream is a Shakespearean feast of magic, humor, music and spectacle, this production offers little more than a few snacks.