Maureen McGovern: Carrying it on…

From now to April 22, nostalgia rules at Two River Theater. Singer/actress Maureen McGovern’s self-conceived and written (with Philip Himberg) one-woman show, Carry It On, is a retrospective of her career and the long and winding road she’s traveled these past 40 years. 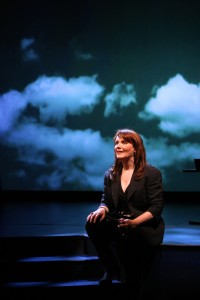 Framed within a reverie provoked by what turns out to be an anti-climactic, unwarranted health scare, Carry It On is a show-and-tell of memories from the 1960s and ‘70s, with a soft-focus on those decades’ social and political upheaval. As befits a show by, with, and about one of that era’s iconic girl singers, the emphasis is on the music and musicians who influenced and inspired her. In the first few minutes she invokes Judy Collins, Odetta and Joni Mitchell. Later, Carole King gets a shout-out, as do Dylan and, believe it, Roy Rogers and Dale Evans. (“I saw Trigger before he was stuffed” might be the show’s best line.)

To the extent that Carry It On is a reprisal of songs from back in the day, it is a pleasure to share. As a sketchy digest of Ms. McGovern’s life, it’s less so. Surely, as my companion noted, her life has been more interesting than as outlined here.  Her conflict with her World War II hero father over differing views of Vietnam gets some attention, but the failure of an early marriage warrants only a mention. I didn’t go in expecting Page Six, but glossing over a menial office job shortly after a Gold record left me wanting some details.

Of course, it’s the memoirist’s choice to open up or not, and what Carry It On does reveal is that the glamorous woman who sang “The Morning After” over the closing credits of The Poseidon Adventure fully 40 years ago, still has her vocal chops.

For the baby-boomers there’s Joni’s “Both Sides Now,” Carole King’s “You’ve Got a Friend” and Laura Nyro’s “And When I Die.” McGovern’s accompaniment is “just” one piano, but with Jeffrey Harris’s mastery of it and of his singer’s vocal mannerisms and phrasing, it’s more than enough. The accompaniment is both rich and unobtrusive, a combination devoutly to be wished by any singer.

In the inevitable Beatles segment, she sings “When I’m 64” to them, facing their projected images, with her back to the audience. We see them and hear her; it works, big time. (Maya Ciarrocchi’s smooth projections and Neil Patel’s framed 3-D set are, pardon the pun, picture-perfect.)

For Broadway aficionados there’s an interesting, if under-developed timeline: hit record in 1973; lousy office job in ‘77; no label in ’78; and replacing Linda Ronstadt in Joe Papp’s revival of Pirates of Penzance in 1981. A segue into “The Music and the Mirror” (A Chorus Line) is a natural. The West Side Story medley is another highlight.

As a mélange of 1960s and ‘70s vocal stylings, recreated in admiration without resorting to imitation, Carry It On is well worth your time. As for insight into what’s surely been a fascinating life, you’ll hafta’ wait for the book.

(We’ve all chuckled at stories about knuckle-rapping Catholic school nuns, but I found two anecdotes more upsetting than amusing. In one, Maureen was made to wear a PIG sign because of a crumpled-up paper in her desk. In the other, a classmate was forcibly shampooed to wash out the Aqua-Net. Sinners indeed!)