Silly Season at NJ REP: “The Hound of the Baskervilles”

There are several conditions under which you might enjoy The Hound of the Baskervilles at New Jersey Repertory Company. One is if silliness is near the top of your entertainment choices. Another would be if you can imagine yourself as a high school student being entertained by the class clowns, and prior familiarity with the Arthur Conan Doyle novel featuring Sherlock Holmes would give everyone a leg up.

Hound was obviously inspired by The 39 Steps, in which four actors play all the characters in a zany stage adaptation of that Alfred Hitchcock movie. In fact, Hound director Mark Shanahan appeared in Steps on Broadway in 2008 and has directed it at several regional theaters. 39 Steps boasted meticulously choreographed stage anarchy, with seamless transitions, subtle wordplay, and no wasted motion.

In an apparent attempt to emulate that success, Shanahan’s Hound’s bark and bite both fall short. It’s harmless enough, and sporadically amusing, but the writing, credited to Steven Canny and John Nicholson, is bereft of the teasing intelligence that made its predecessor so special. (A typical exchange: “He had a massive heart attack – to the heart.”) Too, the playing lacks the necessary precision. Rather than sharp and precise, it’s, well, not exactly sloppy, but it’s ragged around the edges, as if it were being improvised on the spot, which is another genre altogether and one where this piece might have originated. 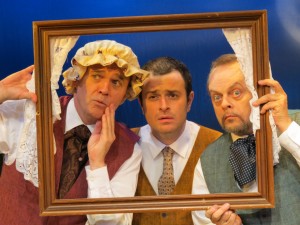 The cast of "The Hound of the Baskervilles" (from left): Wynn Harmon, Rich Silverstein and Gary Marachek

The Hound is framed as a play-within-a-play, with the actors, as themselves, presenting the Sherlock Holmes mystery for a local audience. Among them, the three play Holmes and Watson as well as many of the other characters from the book. The man with the cane, James Mortimer, appears, as does Sir Henry, last in the line of bumped-off Baskervilles. Mr. and Mrs. Barrymore, Sir Henry’s servants, show up, and we also meet bad-guy Stapelton and his sister.  I’m sure the list is incomplete, but the Holmesians among you can fill in the rest. (Another would-be yuck: “Can you swear to his identity?” “I’ll use any language necessary.”)

Wynn Harmon plays Holmes and others, among them Mrs. Barrymore, who grows more feminine with every new costume accessory, and the femme fatale of the piece, who’s ravishing in what looks like Scarlett O’Hara’s window drapes. Harmon does well by those women, but his comic peak is as Stapelton being sucked down to his death ever-so-slowly into the marshy bog.

Gary Marachek does mostly solo duty as Doctor Watson. He’s quite willing to appear bug-eyed and foolish, but his one-third of the script isn’t any sharper than the other two. (One more: “he’s the second most famous person in Europe.” “In your opinion.” “No, in Europe.”)   Rich Silverstein plays Sir Henry and also himself, breaking character and even the fourth wall to good effect. One funny bit has him observing, falsely it should be noted, someone asleep in the front row.

At the start of act two, the three actors re-cap act one in quick-time. It’s a common enough gimmick, done well here. If only the entire play was one 75-minute act instead of two 50s, The Hound of the Baskervilles would have less time to register as a juvenile effort. And they could do the quick-time romp as a curtain call.