Oklahoma! is indestructible. The first collaboration between Richard Rodgers and Oscar Hammerstein II, in 1943, is a recognized landmark in the evolution of the American musical theater, partly because unlike pre-‘40s musicals, the songs move the story along.

And what songs they are. Beginning with “Oh, What a Beautiful Mornin’” and including “The Surrey with the Fringe on Top,” “Many a New Day” and “People Will Say We’re in Love” in the first act alone, the score is a cascade of gorgeous melodies and charming lyrics.

The plot is concerned mostly with whether Laurey Williams will go to the box social with the decent cowboy Curly McLain or with the menacing farmhand Jud Fry. A comic sub-plot has to do with a romantic triangle involving man-crazy Ado Annie, naïve cowboy Will Parker and itinerant peddler Ali Hakim. The relationships, whose resolutions are never in doubt, are played out amidst pioneering men and women who tilled the land and tended the cattle of pre-statehood Oklahoma. 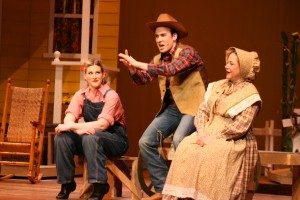 With its magnificent score and family-friendly plot, it’s no wonder Oklahoma! is frequently revived. But simplicity isn’t so easy to play, as evidenced in the over-energized production at the Axelrod Performing Arts Center. Between booming sound amplification throughout and more than a smattering of over emoting, this is Oklahoma! writ large.

The tone is set when Curly faces front during “Oh, What a Beautiful Mornin’” and spreads his arms like a preacher. Oh, oh, I thought; they don’t trust the easygoing opening, which was another Oklahoma! innovation. But all the songs are “indicated,” as if for the hearing-impaired. (Accenting the word “fringe” with wiggling fingers? Really, cowboy?)

Laurey and Curley seem really angry at each other during “People Will Say We’re in Love.” (Maybe Curley picked out her baggy overalls.) The irony is that Austin Ryan and Samantha Croce are not unpleasant to listen to. They’re both good singers who have been instructed, or at least allowed, by director-choreographer Jose de la Cuesta to punch-up their dialogue and songs as if antagonists in a different show. C’mon, this is a gentle couple. He sells his saddle, his horse and his gun, for heaven’s sake, to bid on her picnic basket.

As Ado Annie, who cain’t say no, and Will Parker, home from Kansas City where everything’s up to date, Patrina Caruana and Justin Franco fare well enough. As Ali Hakim, the faux-Persian peddler, Sam Levine has the right idea, but he rushes his lines into incoherence. (Will this Sam Levine play Nathan Detroit next?)

The 2002 Broadway revival, which actually originated in London, elevated the role of Jud Fry, who deepens the play. Jud’s not just the bad guy; he’s the play’s only complex character. Aided by the brooding “Lonely Room,” Rutledge Varley captures both Jud’s darkness and his humanity.

Marti Bookstein is a nurturing Aunt Eller, and Holly Van is just right as giggly Gertie Cummings. (Gertie is half of one of musical theater’s funniest tag-jokes, which never fails to get its laugh.) In the dream ballet Curley and Jud play themselves while in a smoothly staged transition, Patricia McCarron dances Dream Laurey. Her balletic grace provides a lovely interlude.

Chalk one up for musical conductor Jeffrey Unger. Having three of eight musicians be violinists is a fine idea. The Oklahoma! overture, played here in its entirety, is itself a mini-concert.

Last Sunday’s audience of about 200 were clearly pleased. Applause was genuine; intermission comments were favorable. And the second act did improve upon the first. Less bombast would be truer to Oklahoma!, but no one can deny the infectious quality of the rousing title song at the end.