Summer in Sanctuary is the most well-intentioned play in recent memory. Good intentions do not guarantee the best results, however, and playwright-actor Al Letson’s good intentions do him no favor. He’s so immersed in the telling of his story that, to coin a phrase, he over-tells it.

No one can question Letson’s commitment to the worthwhile project that inspired his presentation or to the young people at its core. He and his involvement with The Sanctuary, a community center in a rundown suburb of Jacksonville, Florida, are more than admirable. His 100-minute presentation based on his three-month tenure as a creative writing mentor there, though, is overlong by a third. Letson and director Rob Urbinati might consider a “less is just as good” approach to the monologue. 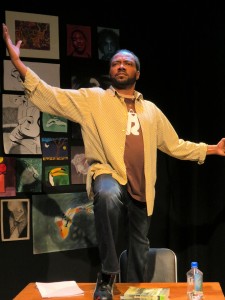 It’s not a fatal flaw. The actor is personable and expressive, and this production is among its first. New Jersey Repertory Company is justifiably renowned for offering deserving playwrights opportunities to fine tune their “works-in-progress.” (Jack Canfora’s Poetic License, which moved from NJ Rep to off-Broadway at 2/3 of its original length, is a recent success story.)

The first quarter-hour of Summer is about Letson’s middle class upbringing in Plainfield, New Jersey and his relationship, or lack thereof, with the N-word and with the basketball moves prized in the ‘hood. The segment, revealing Letson’s un-preparedness for his encounters with the Jacksonville kids, is drawn out, but the point is made.

Letson goes on to describe his reluctance to get involved with The Sanctuary and the persistence of the (white) woman who finally ropes him in. Once ensconced at the community center, its teenaged “clients” take center stage. Letson’s mimicry of their African-American style of street-talk is spot on; his best is a stereotypical teen girl whose hostility (“I got no At-ti-TUDE!”) the actor turns into several comic gems. He also introduces snatches of rap and slam-poetry into the mix, and benefits from some rear-screen video projections (dark here, unfortunately).

Part way through, Biko becomes the main character. He’s a disaffected youth whose downward spiral seems inevitable. Biko’s outcome isn’t tragic, but neither is it the cliché happy ending where teachers struggle for a while and then succeed beyond any realism. That “simply does not happen,” according to Letson, and he sanctifies neither himself nor the kids.

Biko’s tone and personality are established long before Letson stops reminding us, but an anecdote about being stopped by a white trooper with Biko, several other black kids and the Sanctuary woman in his van, is absorbing. Letson finds a way to turn what could be a humiliating encounter into a moral victory.

During that telling, he asks any doubters in the audience to confirm the ubiquity of the ‘black-while-driving’ traffic stop with a black audience member. On opening night, we just had to take Letson’s word for it. Hopefully, some degree of diversity will find its way to NJ Rep during the run of Summer in Sanctuary.