Rated P for Parenthood, which originated at the South Orange, NJ PAC last May, has opened off-Broadway. No show ever deserved the move more. The musical revue-with-a-theme is a highly original, compact series of sketches and songs about modern-day parenting. A gifted cast of four plays moms and dads and their kids at every stage between birth and young adulthood. It’s all upbeat; no delinquency, drug use or defiance here. But that’s what creators Sandy Rustin (book and lyrics) and Dan Lipton and David Rossmer (music and lyrics) intended, and who can’t use a dose of upbeat? 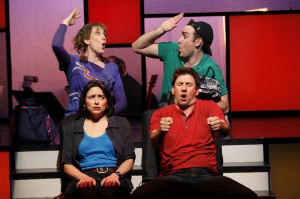 You might think you’ve seen it all before: a nervous mother at a pre-school interview; the dreaded parent-teacher conference; prom night. But this is no sitcom, or if it is, it’s one of the best – and in the flesh. Several “talks,” from how babies get in a mommy’s tummy to awkwardly explaining that 69 is, well, the year Neil Armstrong walked on the moon, are hilarious; a mother’s prayer to her own deceased mother as the first-day school bus pulls away is heart warming.

The show is loaded with “I’ve been there…you nailed it” moments, all without exaggeration or cheap laughs. The “Push It on Out” opening (no pun intended) and a riff about some ultra-personal delivery-room pics posted online are a bit over the top, as is a sketch about Grandma and Grandpa babysitting. But from pre-school, ten minutes in, and all the way through to the first day at college, the blend of comedy and poignancy is dead-on.

The music is plenty tuneful, but it’s the lyrics that capture what parents are really about. (You think soccer moms don’t notice the coach? Think again.) Jeremy Dobrish’s direction is paced perfectly; every scene is crisply handled – no wasted time or movement. The compact band is just right for the material and the venue.

The cast is a formidable foursome. Courtney Balan, Chris Hoch, David Josefsberg and Joanna Young capture complete, well-rounded characters in mere minutes and with pinpoint comic timing. As for versatility, let one example suffice. In “School Supplies,” a mother finds a condom in her high school daughter’s jeans. In the very next scene, “Prom Night,” the previous mom now plays a daughter and the previous daughter…well, you get it. The thing is, it hardly matters which played which. No doubt they could switch every night.

If you’ve ever been a parent, or had one, you’ll find something in Rated P for Parenthood to bring a hearty laugh and a tear or two – sometimes together.