Each of August Wilson’s ten plays illustrates ‘the way it was’ for African-Americans in a different decade of the 20th Century. All the plays are acclaimed; two, Fences and The Piano Lesson, won Pulitzer Prizes. But none is more compelling than Jitney. More than just a story about a group of gypsy hack drivers in a Pittsburgh neighborhood underserved by that city’s licensed cabbies, Jitney is an indictment of urban neglect, a tautly drawn father-son parable, and a highly entertaining, multi-populated character study.

Any doubt that the play, written 30 years ago and set in 1977, is relevant to our time, is dispelled early in an exchange between two men about a social club in their neighborhood. “You used to hafta’ have a job to get in,” one fellow says. “Good thing they changed that,” the other replies. “There would be nobody there.”

The under-the-table drivers (“Where else could I make fifty dollars a day tax free?”) operate as a dues-paying collective out of Becker’s car-service storefront, soon to be boarded up. Under “Becker’s rules,” they take turns answering the calls, while their down time is spent lamenting, bickering, gossiping and, in one hopeful case, planning for a better future. 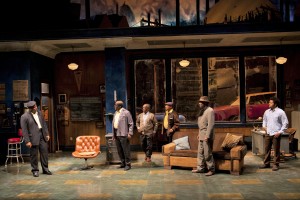 A tense moment from "Jitney"...

The men are types, but not stereotypes. Fielding (Anthony Chisholm, who created the role off-Broadway in 2000) is the resident drunk; the consistently negative Turnbo (Allie Woods Jr.) is as much a hot-head as a big-mouth. Other drivers – and a hanger-on or two – are equally atmospheric.

There are two couples, or pairs, at the heart of Jitney: Becker (Chuck Cooper) and his son Booster (J. Bernard Calloway), released after 20 years in prison for murdering a white girlfriend who, when cornered, accused him of rape, is one. Viet Nam vet Youngblood and his mate Rena (Roslyn Ruff) is the other. Scenes between the Becker men, with dad rejecting son absolutely, are heartrending, while one particular exchange between Youngblood and Rena starts as a downer and ends up being the play’s one buoyant scene. 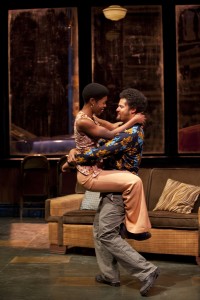 Director Ruben Santiago-Hudson, himself a Tony-winning August Wilson actor (Seven Guitars), told me he envisioned the play as a piece of music…a symphony of several parts where each instrument picks up immediately after the last one’s note leaves off. To that end, he directed – conducted, if you will – with that in mind. It works because the group of characters is so tight knit that they need no thought-gathering before responding to one another. When pauses do occur, Santiago-Hudson said, they serve to let everyone, audiences as well as characters, take a figurative breath, to digest, to contemplate. Over-analysis? Not on your life. Never have quiet moments been more eloquent. The production is indeed symphonic.

It’s also jazzy. The flowing, musical, urban-black vernacular is biting and amusing in equal parts – to all colors of ear. The very nature of that lingo and the pace set by director Santiago-Hudson does result in some less-than-crystal diction (I saw it twice before writing this), but overall this is an outstanding revival. Rarely does an ensemble cast blend this well, each perfectly compatible with the others. As for the play itself: Jitney is not one word too long or too short.