Crimes of the Heart has been called both a “kitchen drama” and a “chick play.” To be sure, the play is set in a kitchen and it is about three sisters in a small Mississippi town in 1974, but the play’s substance transcends labels. Not for nothing was Beth Henley’s 1980 play the first to win the Pulitzer Prize before opening on Broadway.

Now through February 25, The First Avenue Playhouse stage has the look and feel of a real kitchen, and the chicks (forgive me, ladies) who inhabit it seem like they grew up in it. Some of what they say and do borders on outrageous, but hey, it’s their kitchen, not yours. What you’ll find there is an emotionally satisfying comedy-drama, a play that elevates the production to a level that invites tolerance of its flaws. The First Avenue people obviously have confidence in the play they’re doing – no small factor. 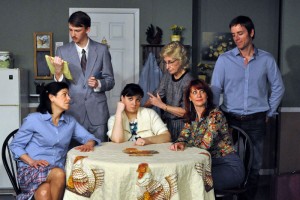 Babe, the youngest of three Magrath sisters (Marsi Caprio), has shot her State Representative husband. Older sisters Lenny (Debbie O’Brien), whose self esteem went missing years ago, and Meg (Samantha Ambler), whose erstwhile singing career morphed into a job in a dog food company, rally around Babe, who explains the shooting with “I didn’t like his looks.”

As sisters do, these three laugh and cry together, scrap with one another and confide their innermost secrets. All have complex histories, mostly traceable to a dysfunctional upbringing and a shared trauma. Any one of their stories could stand alone, but the beauty of Henley’s fine play is that they mesh into a neatly woven scenario.

The three actors are fine, especially when emotions are running high. Babe might have attempted “manslaughter with intent to kill,” but Caprio captures the gal’s innocent nature. Ambler makes it clear that beneath Meg’s outgoing, sexy, live-wire exterior there’s an outgoing, sexy, live wire; and it’s a tribute to O’Brien that we feel so good for Lenny when she finally finds the gumption to take control of her life.

The men are represented by Meg’s old boyfriend Doc (Jason Propst), who up and married a northern gal (gasp…his two kids are half Yankee!) and rookie lawyer Barnette (Fred Hadden), who’s only too glad to represent Babe. Doc’s ongoing appeal to Meg is obvious as soon as Propst walks on the stage, and Hadden, tall and rail-thin, gets volumes from the line “I’m fond of her.” If there’s a villain in the piece, it’s catty cousin Chick, played with a dollop of venom by Grace Emley.

That excellent kitchen was built by Tony Casciano and decorated by Donna Jeanne, who directed the play with, for my money, a woman’s touch. Based on the results, she might as well be the fourth Magrath sister.

Among those tolerable (but not unmentionable) flaws are too many pauses-for-effect that slow the flow of the piece, which is quite long enough. Too, some of the emotional down time is treated like a rest period; cranking up the energy level even when not all elated or pissed off would benefit everyone in the room. Also, some of the verbal comedy is lost in the shuffle (the repeated “lifelong vendetta” is funny, guys) and some plot points need punching up; the girls know the circumstances of their mother’s death, for example, but the audience needs to hear it loud and clear.

To end on a positive note, I don’t remember ever hearing more authentic and consistent southern accents in a community theater production. That’s more than just a mechanical goody; it makes other aspects of the play more genuine. You go into Crimes of the Heart not knowing the Magrath sisters; you leave caring about them. What more you want from a play?