When Jack Canfora’s Poetic License premiered at New Jersey Repertory Company in 2008, the second act’s abrupt change of tone and introduction of too-much-information were significant flaws. Now enjoying a first class off-Broadway production with original director Evan Bergman helming an all-new pitch-perfect cast, there’s no second act and no extraneous plot points. At 80 minutes in one act, the play has morphed into a tight tale of family and professional conflicts in the heady world of literary poetry.

The play is still angst-heavy, but when a bit of melodrama fails to engage an audience, someone please let me know. On the eve of his appointment as Poet Laureate of the United States, professor and Pulitzer Prize-winner John Greer (Geraint Wyn Davies) is confronted by his daughter Katherine’s (Natalie Kuhn) live-in boyfriend Edmund (Ari Butler) with revelations best left under-the-rug. As Edmund effectively strips away layers of the Greers’ self-satisfaction, the best laid plans of John’s controlling wife Diane (Liza Vann) go awry. 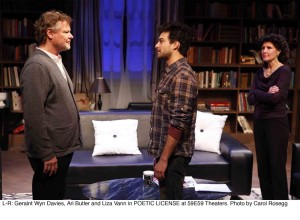 Offering much more detail would amount to a spoiler. Each of Edmund’s mini-bombshells alters the relationships as the balance of power shifts between him and John. Be advised, though, that Katherine and Diane are much more than onlookers; a confrontation between them, in fact, is one of the play’s more powerful scenes. (The scene is extremely well acted, not only by the women, who are fiery, but by both men, who, while stock still and mute during the to-do, are anything but passive listeners. The five, including the director, pull off a text book scene study.)

Wyn Davies, an acting fixture at the Stratford (Ontario) Shakespeare Festival, has a unique way of projecting outward composure and inner turmoil at the same time. That combo served him well as Arthur in Camelot last summer at Stratford and does here as well. Caught between denying and explaining, his John makes it difficult for us to come down squarely on either side, which I gather is the playwright’s intent. Butler comes close to matching Wyn Davies (Edmund is less nuanced than John); their stand-off is anything but comic, but it sure is fun to witness.

Part way into the play, Vann and Kuhn take on a mother-daughter semblance. Katherine is less practiced in war-of-words, but her reaction to mom’s digging remarks has evolved into forbearance over the years. Vann tosses off sarcasm with acid wit. Her Diane is also double sided; likeable and not-so. Kuhn, equally affecting with both dad and boyfriend, is fine throughout, projecting Katherine’s last-to-know dilemma particularly well. 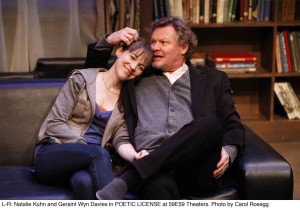 Playwright Canfora’s trust in director Bergman through the editing process is rewarded by the smoothly revealed push-pull relationships and more than a few evocative stage pictures, an often undervalued craft.