Come in out of the cold: to a Broadway theater…

Sure, you’d like to see The Book of Mormon . Or even catch up with Wicked, still going strong after eight-plus years. Who wouldn’t? But tickets to Broadway blockbusters are not only expensive, they’re sold out for months.

The good news is that a well-populated tier of quality plays and musicals just below Blockbuster status can be had at bargain rates, especially in January and February. The trusty TKTS booth at 47th and Broadway has more tickets to more shows in these slow tourist months, and other discount sources are available as well.

One of the best deals is the annual Kids’ Night on Broadway week. From Sunday, Feb 5 through Thursday Feb 9, kids age 6-18 go free with a regular-price adult ticket. (Do the math; that’s half price.) About twenty Broadway shows are listed, as well as top-quality off-Broadway, and while some will be sold out, the list includes such family-friendly shows as Mary Poppins, Godspell and even The Lion King. As for off-Broadway, where half-off lower prices is even cheaper, Million Dollar Quartet, Rent and Avenue Q are going strong for good reason. Go to KidsNightOnBroadway.com for details, which also include half-price dinner deals.

The spirited revival of How to Succeed In Business Without Really Trying has a new leading cast and a month-long ticket deal. Replacing Daniel Radcliffe as the clever corporate climber is Nick Jonas, still, they tell me, an adolescent’s heartthrob. (For the elders, Beau Bridges plays the CEO mentor.) From late January through February, How to Succeed orchestra and mezzanine tickets are $77, from $132. (Radcliffe might have been the box-office draw, but the Jonas brother has gotta’ be a better musical performer.) 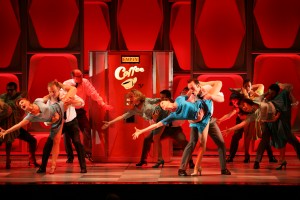 Don't try this at home! ("How to Succeed" dancers)

A wait on the TKTS line, even in chilly weather, is time well spent. Many of you have probably been-there-done-that, but if not: Unsold day-of-performance tickets are sold at TKTS for half-price (plus a $2 service charge). Available shows are listed on LED boards, and they do accept debit and credit cards. Evening performances (commonly 8pm, but many at 7 on Tuesdays and some other days – be sure to check) go on sale at 3pm; Wed, Sat and Sun matinees (2pm or 3pm) at 10am.

For all the shows on all the days, the early bird gets the best perch; seats are sold in best-location order. It’s not unusual for the TKTS line to form early. Broadway is a pedestrian plaza from 47th to 42nd streets; there are worse places to while away a couple of hours.