There’s a 90-second segment in Boeing Boeing at Paper Mill Playhouse where the characters exude relaxed, natural charm. The scene is staged – one might say choreographed – with effortless precision, and the six actors all give winning performances. That segment is the curtain call. What precedes that refreshment is two hours of labored, high-decibel activity that takes a half-hearted stab at farce. 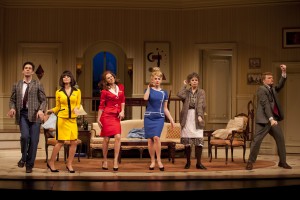 Written in French in 1962 and soon translated for Broadway, where it closed after 23 performances, Boeing Boeing is as fixed in its time period as is the term Air Hostess, which morphed through Stewardesses into Flight Attendants. The 2008 Broadway revival was a modest success, thanks to Mark Rylance’s quirky, Tony-winning performance. The seams showed and the hinges creaked, but it was all tongue-in-cheek. At Paper Mill it’s all seams and creaks.

Bernard, international playboy of unspecified means, maneuvers three Air Hostesses in and out of his Paris apartment based on their non-coinciding flight schedules. And wouldn’t you just know it, soon after old pal Robert shows up, the flight schedules go hooey and all three honeys show up at once. And that’s it. Really…that’s it.

The situation is mildly amusing, if you’re not turned off by lame pre-feminist un-sexy bedroom jokes…or by repeated drink-spitting to indicate surprise…or by accents that blur every fourth word…or, and I’m not making this up, by an attack of flatulence that lasts a good five minutes that seems like forever.

If Heather Parcells, Brynn O’Malley and Anne Horak didn’t appear together in some scenes as the pretty young ladies, any one of them could play all three. From TV soaps, novice stage actor Matt Walton is all novice-ness as Robert, and you might admire John Scherer in the flashier role of Robert if you hadn’t seen Rylance. Tony-winning veteran of musicals and comedies Beth Leavel has some funny moments as the maid who keeps the household on its bizarre schedule. (Fortunately for all concerned, she’s wearing thigh-length knickers for her pratfalls.) 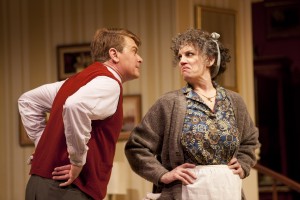 Tempting as it is to blame the cast and director James Brennan for a lackluster effort, the dated play itself wouldn’t make it past a sitcom pilot. And besides, the spiffy curtain call shows they all have more going for them than Boeing Boeing allows.