“American Idiot” on the road: Vivid…Infectious

Disaffected youth in your face...

American Idiot, Green Day’s 2004 rock concept album, went six-times platinum in the U. S., Canada and the UK, which doesn’t happen by chance. The 2010 stage adaptation ran more than a year on Broadway and won two Tony Awards. No accident there either. After opening last month in Toronto, the first national touring company will be rocking the Opera House in Detroit on January 17 for a six-day run. Don’t miss it.

Green Day’s American Idiot, the show’s official title, is a vivid examination of disaffected American youth. The music (Green Day) goes from intensely thundering to wistfully lyrical and the lyrics (Billie Joe Armstrong) are alternately blistering and reflective. The stirring opening song, “American Idiot,” sets the tone of rebellion against a mass media, TV-saturated society. Twenty more numbers punctuate the intermissionless hundred minutes, and the production itself is a feast of sound and lights.

While any review that failed to note the specific appeal of the punk-rock score would be irresponsible, please do not pre-judge the show. It may not be your taste going in, but the music is as infectious as the energetic cast that wrings every drop of feeling from it.

Besides, there’s more to American Idiot than meets the ear. The story, set in “the recent past,” is engrossing. Three best friends plan to leave mundane suburbia for The City. One of them, Will, stays home with his pregnant girlfriend Heather (“Tales of Another Broken Home”), while another, Tunny, is seduced by TV ads into joining the Army and is severely wounded in a war zone (“Give Me Novacaine”).

The causeless rebel Johnny drifts into a life of self-indulgence, spurred on by his own worst instincts, represented by the symbolic, sinister drug dealer St. Jimmy. Johnny, played by Van Hughes, fresh from the same role on Broadway, gets high on heroin and passionate sex with a girl he calls Whatsername (“Last of the American Girls”), who leaves him when he hits rock bottom. Tunny, meanwhile, is nursed back to health by “The Extraordinary Girl,” played by Nicci Claspell, who is that and then some.

Along the way there are references to specific personalities and incidents from the recent past. A bank of TV screens conjures up images of pontificating politicians, natural disasters and 9/11 (the haunting “Wake Me When September Ends”).

Original director Michael Mayer, who co-wrote the book with Billie Joe Armstrong, is at the helm here too, making this more an extension of the original than a reproduction, especially on the Tony-winning set and lighting designs of Christine Jones and Kevin Adams, respectively. 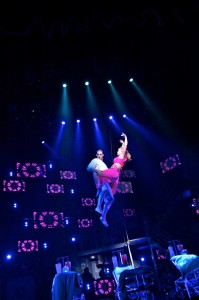 On a high with The Extraordinary Girl...

What sets American Idiot apart from other so-called “protest” pieces is its resolution. It’s no spoiler to reveal that despite disillusionment, the play ends on a note of hope. The idea that acceptance of things as they are is neither defeat nor copping out is brought home at the curtain call as the entire company sings “Good Riddance: The Time of Your Life.” Don’t leave too soon.