A dire tale on Broadway…told with “Wit”

In “Wit,” Vivian Bearing, a (fictitious) former professor of 17th-Century literature and John Donne’s poetry in particular, has been diagnosed with stage-four ovarian cancer. It has metastasized to her bones; she is dying. For the sake of research into cancer treatment, she agrees to massive doses of chemotherapy. Besides the ‘regular’ side effects of chemo, which include nausea and hair loss, the high doses wrack the patient further. “My treatment imperils my health,” she understates through excruciating pain. 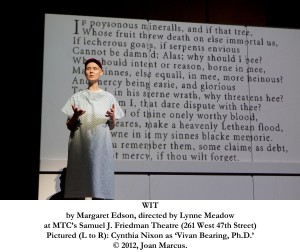 Dr. Bearing’s decline and her coping with it are the unlikely subjects of Margaret Edson’s first (and only) play, written in 1991 and Pulitzer Prize winner in ’99. “Wit” has never been better served than by the director and cast of the first-ever Broadway production. (Its previous run was off-Broadway.)

In the demanding leading role, Cynthia Nixon is remarkable. In 100 intermission-free minutes, she takes us from Vivian’s initial diagnosis, through the stages of treatment, to her acceptance of the inevitable. Along the way, she stands out in spunky flashbacks and addresses the audience directly on the topics of mortality (hers), metaphysical poetry (Donne’s), and the relationship between the two.

It’s telling that playwright Edson is a teacher, albeit currently of sixth-grade social studies, because the discussions, musings and one outright lecture on Donne are not only instructive, but totally lucid as well, especially as delivered by Nixon. It’s a prime example of the actor serving the material, and vice versa. (The play is about Dr. Bearing grappling with her condition, but the Donne business is fascinating on its own.)

Much is made in “Wit” of Professor Bearing’s notoriously stern, unyielding temperament. She’s also given to bitingly sarcastic put-downs. In Nixon’s playing of the sometimes irascible woman, we don’t forgive those potentially off-putting qualities or accept her in spite of them, either of which would be presumptuous. No, we embrace Dr. Bearing partly because of her hard-line ways, and director Lynne Meadow and Ms. Nixon’s collaborative melding of those qualities into the multifaceted performance. “Wit” is somber going, and sarcasm can equate to meanness, but not here, where there are more honest laughs than in many a cheery-intended comedy.

With a red baseball cap concealing a chrome dome, and a slender neck that makes Audrey Hepburn look like Big Daddy’s grandchildren, Ms. Nixon looks for all the world as if she were indeed falling away to nothing. That and everything else she does in “Wit,” is what’s called acting. 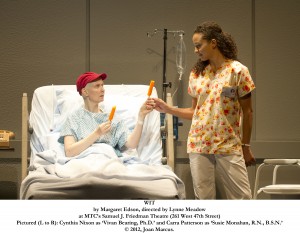 Dominant as the Bearing character is, and omni-present, “Wit” is not a one-person play. Carra Patterson is outstanding as a sympathetic nurse; young resident Dr. Posner is more interested in the research than the patient, but Greg Keller finds the character’s humanity and, ultimately, his humility. Suzanne Bertish ranges well in decades-separated scenes as Vivian’s former teacher – then she bristled; now she comforts.

John Donne is a virtual co-star. Besides the relevance of his best-known work, “Death be not proud…,” his medical prescience can be downright eerie: “When I am dead, and doctors know not why and…curiosity will have me cut up to survey each part…”  While treatment for cancer has developed beyond massive chemo dosing in the 20 years since the play was written (both Ms. Nixon and Ms. Meadow have undergone lumpectomies), really…they still don’t know. Sheesh.