You don’t hafta’ be a kid to love “HONK!” at Two River

Some years ago I came up with a way to compare the relative quality of shows I had recently seen: If I had to see one of them again soon, which show would I pick?

Since Thanksgiving 2011 – writing this on December 18 – I’ve seen four musicals (three on Broadway) and seven plays (four NYC), and there is a clear winner. It’s Honk! at Two River Theater in Red Bank, where I might well see it again and where you can see it at least once before it closes on January 1.

Honk! is officially for children, but the music, lyrics and book are as appealing to adult sensibilities as they are to ages as young as five. And even if they weren’t, the approach to the work by every artist involved merits grown-up attention.

The show is a loose adaptation of the Hans Christian Andersen story of The Ugly Duckling. With music by George Stiles and book and lyrics by Anthony Drewe, it begins with five duckling hatchings, including one who’s waaay different from the others. Seeing as how he’s ‘different,’ they name him Ugly. He’s played by Paolo Montalban, who is anything but ugly, which makes the point about attitudes toward ‘different’. 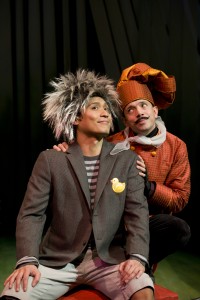 Lured away from his nest by a French cat (Doug Hara) with a taste for duck l’orange, Ugly must find his way back into mama duck’s wings. The song titles tell the story: “Different, “Look at Him,” “Lost,” “Every Tear a Mother Cries,” “Warts and All,” “The Blizzard” and “Transformation,” with a few others in the mix as well.

Directed without a shrugged-off moment by Matt Pfeiffer (Two River’s equally fine Charlie Brown and Charlotte’s Web) and with choreography by Jenn Rose that makes some recent Broadway efforts look like grade-school dance class, Honk! takes Ugly through a series of adventures with a feathered and furry menagerie.

Twelve actors, who cover double that number of roles, are all outstanding. Montalban (the Prince in Disney’s Cinderella on TV) is just right as the wide-eyed, innocent Ugly, and Kenita R. Miller acts and sings a master class in feathered motherhood. Could there be a more agile performer than Hara? He absolutely channels feline-ness. And whoever came up with the idea for the huge, carpeted cat-tower deserves a ‘genius’ grant.

Michael Genet is no turkey, but he plays one to perfection, exceeded only by his Bullfrog, who anchors the terrific number “Warts and All.” (This is a good place to mention the four talented local kids who play Ugly’s siblings and who double as song-and-dance Froglets: Laura Diorio, age 13; Owen Doherty, 12; Julian Sarin, 8; and Gabriella Scerbo, 11, are every bit as professional as the pros.) 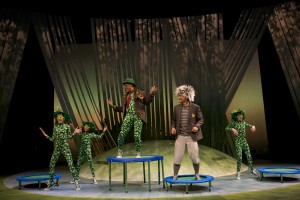 Every technical aspect of the show is spot-on. Wayne Barker’s musical direction, both vocal and instrumental (a neat six-piece band) is super, and scenic designer David P. Gordon’s revolving walkway allows for simulated travel and for seamlessly moving set pieces on and off. Jeanette Oi-Suk Yew’s complimentary lighting and projection design is as creative as you’ll see anywhere. As for the costumes: Designer Olivera Gajic’s name belongs above the title.

There’s a ton of puns and a gaggle of gags in Honk! Some are inspired, many are groaners, a couple are even risqué; but guess what – they’re all funny. The ducklings’ father’s name is Drake, of course, and the way to make a turkey jump in the water is by shouting FRANK PERDUE at him. TV reporter Maggie Pie interviews the distressed mom for “America’s Most Feathered,” and…well, you get the picture.

At just over two hours, including intermission, the play could stand to lose about ten minutes, half of them in the Goose scene, whose militarism and goose-stepping brings to mind, for audience elders at any rate, the four-letter N-word that includes a Z. Also, there is a school of children’s lit that would decry the story’s ultimate cop-out. Ugly isn’t finally accepted “warts and all.” Rather, he morphs into something attractive, which waters down the message. It’s still good theater, however, and criticisms of this production are few and minor, so the heck with them.

One thing bears mentioning: Segueing directly from curtain calls into a Q & A with the cast dilutes the theatergoing experience. Why cap the show’s high with a plodding classroom effect? (“How did the walkway revolve?” “Someone pulled a control switch.” Thud.) I’ve discussed that ill-advised practice with Two River’s Artistic Director John Dias, who appears unlikely to abandon it. So when I re-visit Honk! I’ll make a hasty exit before they despoil the fantasy.

At Two River Theater, Red Bank, NJ through January 1. Performances at various times, including midday matinees between Christmas and New Year’s: call 732-345-1400 or visit www.trtc.org for schedule and tickets ($50 adults; $25 under 18).