During intermission on opening night of Phoenix Productions’ Sweeney Todd, a woman seated near me said, “Maybe it’s our age.” We were discussing our inability to discern a substantial portion of the lyrics. I pointed out that every syllable sung and spoken by the show’s Sweeney, David Weitzer, had been clear. It wasn’t us.

The slurred diction detracts from an otherwise exemplary show in which Mr.Weitzer is much more than just intelligible. He’s a bravura baritone and a commanding presence throughout, so good in the role, in fact, that he elevates others’ performances. The overall result is a show that’s true to its darkness. (That’s darkness of content, not of stage lighting, which is outstanding.) 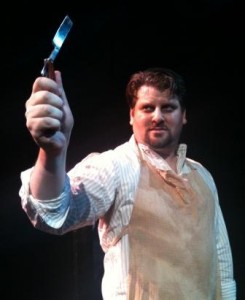 David Weitzer as The Demon Barber

The story of The Demon Barber of Fleet Street dates from a Victorian thriller that was adapted by Stephen Sondheim (music and lyrics) and Hugh Wheeler (libretto) into Sweeney Todd. Nearly entirely sung through, the show won eight Tony Awards in 1979.

It’s the gruesome story of a London barber who returns from an unjust 15-year imprisonment seeking revenge on the judge who sentenced him, then raped his wife, and who now plans to marry his daughter. (Ew, right?) The obsessed Sweeney proceeds to slit the throats of his customers in partnership with Mrs. Lovett, who makes meat pies from his victims.

The prologue has a chorus of Asylum inmates inviting us to “attend the tale of Sweeney Todd.” It’s an eerie tableau, portrayed very well by the Phoenix ensemble, two dozen strong. The story unfolds in the London streets, in Sweeney’s barber shop over Mrs. Lovett’s bakery, and at the Judge’s house, where the daughter is a virtual captive. The multi-set design (Bill Motyka) is serviceable, especially the elevated crossover at rear. Anthony Callichio’s lighting design compensates for some cumbersome scene shifts, isolating playing areas with varied hues that enhance the action.

Mrs. Lovett is drawn to the vengeful Sweeney. Alison Gleason plays the smitten enabler with the right combination of amorality and humor. Their “A Little Priest” duet, about how different occupational ingredients taste in a meat pie, is a masterpiece of the macabre. (Diction a factor here.)

Judge Turpin is equal parts unctuous and lascivious; Michael Chartier skillfully blends both those qualities into a thoroughly dislikeable character. Howard Whitmore isn’t far behind as the nasty Beadle. A beggar woman, played by Kathleen Marhold, is more than she seems, and Christopher Cortes brings the requisite strangeness to Toby, Mrs. Lovett’s apprentice.

Sweeney’s innocent daughter Johanna (Jessica Lopez) and Anthony, an itinerant sailor (John Sechrist), are the play’s Juliet and Romeo, right down to the balcony. They both sing sweetly (the yearning “Green Finch…” by her and his haunting “Johanna”), but her wig is a distraction. Johanna’s tresses make a plot point, but conjuring up a blonde Louis IVX may not be the way to go. Combing it out would soften the look.

Director Tom Frascatore and musical director Nick Degregorio must share responsibility for the inattention to articulation, but their work otherwise is admirable. Frascatore uses the whole stage to good effect and has ‘choreographed’ the ensemble scenes deftly. Degregorio’s ten-piece orchestra is the most accomplished in my Phoenix memory.

Careless enunciation creeps in when directors and performers, familiar with the lyrics, hear them clearly however they’re delivered. But most audiences are hearing them – or not – for the first time. Oklahoma’s mornin’ is a beautiful one fer sure, but Sweeney Todd needs its consonants.