In pitching automobiles, insurance, whatever, there’s such a thing as ‘selling past the close.’ A client is ready to buy, but the salesperson keeps talking, paraphrasing and reiterating until the sale is lost. That’s the problem with Seven Homeless Mammoths Wander New England, Madeline George’s world-premiere play at Two River Theater.     In exploring a half-dozen social and philosophical issues, Ms. George extends scenes and speeches within those scenes way past their effectiveness. Included in the verbosity, if not the plot, are dissertations on education, sexuality, compassion, mortality and overall existentialism, with occasional riffs on the vapidity of small-town news coverage. It may not be a fatal flaw, but it is extremely off-putting.

The surface plot has to do with a New England college’s plan to convert its Natural History Museum into an upscale dorm for incoming freshmen. Dean Wreen (Mercedes Herrero) is conflicted over the decision. While she recognizes the cultural ardor of its supporters, she really doesn’t give a damn about the poorly-attended, student-neglected joint or the Mammoth skeletons on display within.

The play is concerned less with the museum saga than with the relationships among the Dean, her current, much younger lover Andromeda (Flor De Liz Perez), and her former, same-age lover Greer (Deirdre Madigan), who is dying of cancer. The three women co-habit in Wreen’s apartment, where they debate issues ranging from the existence of God to the technical aspects of brick-laying, which they do over a dinner of bow tie pasta. 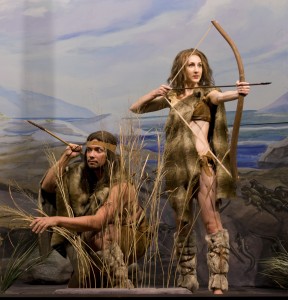 Most of the action, which includes a sexual encounter between Wreen and Andromeda that is elongated into audience discomfort, takes place in Dean Wreen’s digs. But the best scenes are inside the museum, where Jon Hoche and Lauren Culpepper act the heck out of a Cro-Magnon couple in a diorama without moving a muscle.  They recreate what is said by visitors to the museum, including during a totally realistic Xanax high and an orgasmic finish that’s miles beyond the one being enacted stage left. If playwright George intends the Paleolithic’s valley-girl-and-guy lingo to bear out that the more things change, the more they stay the same, she succeeds admirably.

Andromeda, saddled with philosophical gibberish that she has the good sense to rush through, is at least likable, which cannot be said for the other two, prickly women characters. Less harsh direction by Ken Rus Schmoll might have warmed them, although Dean Wreen reacting to unwanted media attention with “I’d rather have a Dean’s List kid die of alcohol poisoning” would be hard for Meryl Streep to overcome.

Greer comes by her sour disposition honestly; terminal cancer does that to a person. But she’s a boorish font of acid-tongued sarcasm. Wreen asks Greer after one convoluted harangue “Are you reciting doggerel of some kind?”  Well, yeah.

There’s a museum caretaker, played well enough by Joel Van Liew, whose function it is to read (nicely memorized) excerpts from the daily paper, including letters to the editor, columns and the amusing minutes of a Board of Selectmen meeting.

Existentialism, a philosophy that values the interpretation of experience over reason, and exemplified in the play by Andromeda, is difficult enough to articulate without the burden of repetition. And while the Dean and Greer do finally embrace Andromeda’s spirituality, if not her comfort with “alternate kinship structures,” it’s too little, too late, in too many words.