Don’t leave “No Child…” behind!

Nilaja Sun doesn’t just create a miracle; she is a miracle. No Child…, her one-woman play at Two River Theater, is as enlightening as it is entertaining, as heart-rending as it is amusing, and as richly populated as a big-screen epic.

Ms. Sun has drawn on her experiences as a ‘teaching artist’ in several New York City public schools to create a 75-minute play that says more about the power of participatory art to inspire and uplift than all the essays on the subject put together.

Nilaja Sun as, well, everybody, in "No Child..." (Photo: T. Charles Erickson)

Set in Malcolm X High School in the Bronx, No Child… distills a semester of once-weekly classes where a play is introduced to urban kids who’ve never even seen a play, then cast with those kids, rehearsed under inhibiting academic and social conditions, and eventually performed.

Including the female and male students, there are 16 characters in the play. Sun plays – no, inhabits – them all, bouncing from persona to persona without as much as a second’s pause. And every transition is delineated to the sharpness of a razor’s edge. 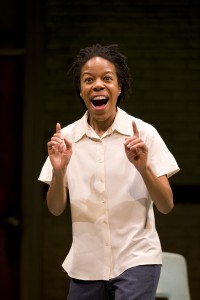 No Child…is book-ended by the school custodian, an elderly fellow in need of a hip replacement who ruminates on the changes in personnel and attitudes over the decades he has manned his dry mop. There are also al teachers and a tough-but-supportive principal, but Sun’s most vivid impersonations are of the students.

One high-schooler becomes an ‘actress’ as soon as it dawns on her that she’ll be performing. It takes one vocally-challenged young man longer; his transition takes on a near-religious aura. The students coming out of their shells are not funny or poignant; they’re funny and poignant at the same time, in the same line, even word. What a sensory pleasure it is to laugh and weep simultaneously. (In character as the teacher, Ms. Sun’s admission of nervousness to the students is a heart-tugger.)

It’s telling that the play-within-the-play, Our Country’s Good, is about convicts. The point about the kids being prisoners of their environment is driven home by the unfeeling school security guard who keeps sending a boy back through the metal detector at the school’s entrance. Beep, his belt. Beep, his shoes. Beep, bring out the wand. Makes Terminal C at EWR seem like a picnic.

Do not doubt for a moment the importance to a one-person show of the director.  Experienced in that specialty, Hal Brooks has fine-tuned Sun’s performance without inhibiting any of her boldness. The superb one-woman performance is clearly born of a close artistic collaboration.

Sun’s play is marginally political. She points out that the Bronx includes NYC’s poorest Congressional District, only 18 minutes by subway from the richest, and the ellipsis (…) in her title stands in for …left behind. As aptly as No Child…is titled, even more on the mark is the name of its creator: the Sun is indeed out and shining brightly at Two River Theater.