Most of the characters in Billy Van Zandt and Jane Milmore’s farces are written to the edge of absurdity. Playing them ‘straight,’ or as written, is the key to pointing up their ineptitudes, awkwardness and downright foolishness. No matter how exaggerated their foibles, the folks who inhabit Wrong Window, say, or even A Night at the Nutcracker, are real people. 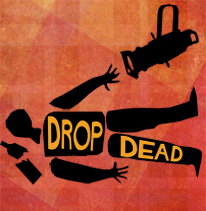 But going over the top is counter-productive and Holmdel Theatre Company succumbs to that temptation with Drop Dead. Whatever your metaphor – gilding the lily, chocolate syrup on chocolate ice cream, most of the characters are overdone. (They’re not over acted; it’s the choice of how to present them that’s off kilter.)

The play, one of Billy and Jane’s earliest, isn’t one of their best. Act one takes place during the final dress rehearsal of a theater-based mystery; act two is a performance of that play, titled, in turn, Drop Dead. The premise, which has worked better elsewhere (Kander and Ebb’s Curtains comes to mind), is an old standby: real murders are occurring during the staging of the play-within-the-play.

The characters include the usual egotistic leading man and woman, the stuffy producer and his ditzy actress girlfriend, a pompous director, a gay stage manager and a few other stock character types. By the time Drop Dead within Drop Dead is over and the murderer is revealed (with little or no logic, a fault of the play), every shtick in the book has been brought out and tried on…and on…and on.

Gary Shaffer is an accomplished director of farce. His 2008 Noises Off at Holmdel was “perfectly calibrated…hilarious.” But here it’s as if he didn’t trust the play. Granted Noises Off is a masterpiece compared to any farce ever written, but allowing or even urging his Drop Dead cast to these extremes doesn’t really serve the play.

But, hey…there are some laughs. Tellingly, most come via the relatively ‘straight’ Leslie Wheeler, who dodders around as a befuddled, hard-of-hearing actress who misses her cues and mangles her lines. Playing it in character throughout, Ms. Wheeler gets her laughs without excessive mugging. Even her red granny drawers seem like a natural fit.