ReVision Theatre’s Little Shop of Horrors is my seventh since 1997, including the 2003 Broadway revival. The good news is that the show is as good as ever. The bad news is that it wasn’t much to begin with.

Based on Roger Corman’s 1960 non-musical “film shot in two days,” it’s set in Mushnick’s flower shop on Skid Row, where meek Seymour Kleborn breeds a plant he dubs Audrey II out of love for shop girl Audrey. The mysterious plant responds to the taste of blood and grows to an amazing size, fulfilling Seymour’s dreams of success in exchange for room service delivery of live entrees.

Little Shop is not exactly a significant entry in the annals of American musical comedy, and there’s nothing sacred about Alan Menken’s music or Howard Ashman’s book and lyrics. What it does have, though, and what ReVision tinkers with, is a small piece of vegetation that ends up dominating not only the people in the play, all of whom it devours, but also the audience and, via cuttings, everyone in the world. The case can be made that visualizing that potted menace’s gaping jaws is the whole point. 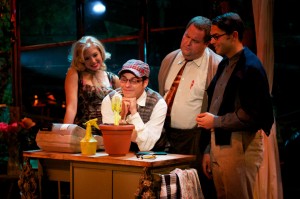 Here, the mature Audrey II doesn’t resemble the starter bloom, and having a strangely-costumed girl pop in and out of a giant, up-ended pea pod to lure the characters in for dinner obviates that point. Regardless of its advisability, the concept would work somewhat if either the girl or the pod were intimidating. Despite long, pointy fingernail extensions, Dayna Jarae Dantzler is hardly a frightening Hannibal Lector.

Rhiannon Hansen’s Audrey is cute beyond words and seemingly innocent while really not. Hansen does Audrey’s high-pitched squeal without mimicking Marilyn (“bizarre” is priceless), and she sings sweetly. She doesn’t try to improve on “Somewhere That’s Green,” the show’s pretty tune, and musical director Michael Thomas Murray’s band, overpowering at other times, backs her gently. It’s a lovely few minutes. 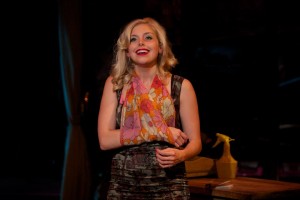 Rhiannon Hansen is Audrey I

Chalk up Michael Linden’s extreme reticence to his take on nerdy Seymour. Audrey brings Seymour out of his shell (no surprise, actors or characters) with “Suddenly Seymour.” The duet works musically and energy-ally in a show in need of both.

The singing “chorus” of Aliya Bowles, Stephany Mora and Chelsea Zeno provides a ton of attitude. Their rendition of the title tune and snippets of rock work as scene breaks.

I guess director Mary Catherine Burke thought Little Shop needed a bit of an overhaul, and while she qualifies for the Courage of Convictions Award, maybe it’s time to plant Audrey II firmly in its natural habitat, high school productions.