A Guilt Trip Worth Taking…

Jericho, Jack Canfora’s new play at New Jersey Repertory Company, is about guilt and the corrosive effect it can have on feelings of self worth and on relationships.

It’s also about 9/11, the nature of grief, the Israeli-Palestinian conflict, marital discord and that old theatrical standby, a dysfunctional family, although, as the play rightly points out, every family is crazy, even the well adjusted ones.

Beth (Corey Tazmania) is a Manhattan-dwelling 9/11 widow, coping with issues that go beyond the loss of her husband. Her new beau Ethan (Andrew Rein) waits patiently for her to come ‘round to embracing a new beginning – and, for that matter, embracing him. Thanksgiving dinner at his mother’s in Jericho, Long Island doesn’t help. Ethan’s brother Josh’s (Jim Shankman) marriage to Jessica (Carol Todd) is in shambles, and Ethan and Josh’s mother Rachel is, mildly stated, a fussbudget. 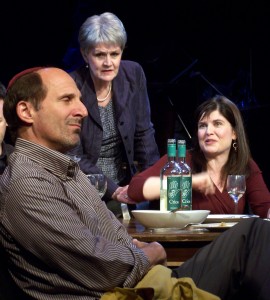 At the start, all these folks are ‘too clever by half,’ annoyingly proud of their own (read: Canfora’s) intelligence. It’s an irritating affectation, which, fortunately, tapers off part way in, as the context mutes the glibness.

The play is very well acted. “Jewish mother” Rachel is played so well at the edge of that stale stereotype by Kathleen Goldpaugh that she emerges as the most sympathetic character in the family, if not the play.

Beth is conflicted over her guiltandgrief as well as her ethnicity and her inability to connect with Ethan. Ms. Tazmania is devilishly good at playing Beth’s insecurities without making her psychotic or, worse (for the play), a wimp. Scenes with her therapist (Matthew Stephen Huffman) are simple Psych 101, but they provide background info, and Huffman’s controlled performance is increasingly impressive as the play develops.

Rein plays Ethan’s wishy-washiness very well, including his problems dealing with pushy mom and pushier bro; you feel for him. Josh’s adamancy gets tiresome, but Shankman acquits himself admirably. Those were real tears in one emotional scene on opening night.

Jessica is some piece of work, and Ms. Todd plays the unhappy woman with a ton of sub-text. In the aftermath of the turbulent Thanksgiving dinner, during which the walls of this Jericho family come tumbling down, Jessica has the play’s best speech. She’s been guzzling the wine, and Todd, playing against tipsiness (as drinkers do), strips Jessica emotionally bare. It’s a blisteringly honest performance.

Under Evan Bergman’s astute direction, all the relationships are well defined and the performances mesh as a unit.

Mr. Canfora has a talent for revealing plot twists and secrets through natural interaction and conversation. Information about the therapist is one example; finding out about a character doing someone-on-the-side is another. Even one biggie that’s sprung late in the play had been hinted at earlier.

But Jericho also succumbs to a couple of bugs not uncommon to new plays. For one, the playwright is enamored of profanity. Be advised, playwrights far and wide: constant repetition of the f-word dilutes its effectiveness. (At one point the word is gratuitously repeated over and over. What up with that?) Also, the last ten minutes takes a half hour, which is critic-speak for the playwright writing past the ending. Having resolved his points, Canfora states and re-states for emphasis. He even goes esoteric and poetic on us with a coda that befogs rather than clarifies what’s gone before.

The bugs are easily modified and shouldn’t dissuade anyone from visiting Jericho. It’s good Theatre.