A Fangless “Dracula” in Spring Lake

Shhh…be quiet for a second…hear that creaking sound? It’s not the lid of Dracula’s coffin; it’s the text of his play, Dracula, suffering from the infirmities of old age. The 1927 play is on life support through this weekend at Spring Lake Community Theatre Company.

The play is a straightforward presentation of the Dracula legend, in which the 500-year old Transylvanian Count, who sleeps in a coffin by day and who, um, necks with young lovelies at night, is finally put out of his misery – and ours – with a stake through his heart. 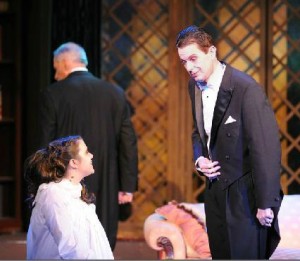 Compared to some recent vampire/zombie “entertainment,” the play isn’t really scary, and because who-did-what-to-whom is revealed in the first 15 minutes, it doesn’t hold up as a mystery either.

So the thing is, if Dracula isn’t played for laughs, it doesn’t play at all. Unfortunately, no one in the Spring Lake Community House last Friday night seemed to realize that. That includes most of the people on stage as well as the audience. (Three laughs in 100 minutes? It’s not just me.)

A father and a fiancé of a young woman who is having her blood sucked out regularly via two gaping holes in her throat being played without a trace of irony or satire makes as little sense as playing an exposition-spouting German scholar-of-the-undead without an accent. And not imbuing the blood-suckee with exaggerated fragility may just be a function of the three-generation span between the Spring Lake actress and the young Lillian Gish.

There’s a resident loony on the premises who reportedly eats flies and spiders and insects (oh, my!), although not in this production. There’s also his keeper, who can’t keep track of his only charge, and a maid whose hypnotic trance begs to be parlayed into a metaphor (too easy).

Then there’s Count Dracula, the only character that evokes a chuckle. Good old Drac, over-acted (a compliment) by Eric McDonough, whose resemblance to Bela Lugosi is eerie in itself, is the only one that director Tim Walling seems to realize is a caricature. But, guys, they all are. Or should be.

(Any Dracula that doesn’t include the line “I don’t drink [pause] wine” or any sort of a bat should be against the law.)