A dream of a play…

At the conclusion of a well-crafted mystery story, the reader should be able to think back and recognize clues or hints embedded in the text, however faintly, that foretold the outcome. So it is with Adam Rapp’s new play Dreams of Flying Dreams of Falling, where facts and events pop up seemingly out of the blue. Looking back, they’re all “oh, yeah” moments.

In Rapp’s 90-minute play, produced off-Broadway by Atlantic Theater Company, we are at home with Bertram and Sandra, a well-to-do Connecticut couple in their late forties, their 26-year old daughter Cora. Their equally upscale dinner guests are Dirk and Celeste and that couples’ 20-something son James, recently released from an unnamed medical facility. Also on scene is the maid Wilma, a much more than functional character. Unfamiliar to us at the start, the dinner-party six are soon exposed as complex, troubled, secretive individuals who go on to reveal more and more about themselves in spite of themselves. 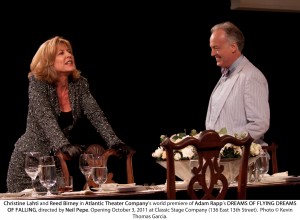 Christine Lahti and Reed Birney are Sandra and Bertram in "Dreams of Flying..."

Some of the play is dinner conversation, by turns frivolous and pointed, gracious and hostile. All the while there’s an ominous undercurrent, paralleled by the threat of wild geese slamming into the side of the house. Throughout, Dreams/Dreams turns on actions and events that we could not have predicted…or could we? Thinking back on the play is almost as rewarding as seeing it.

All this about the play doesn’t diminish the crafty direction by Neil Pepe. He has blended a course between comedy and drama, overstating neither, that is seamlessly navigated by his actors.  Christine Lahti’s stunning performance as Sandra (pronounced Saundra, of course) stands out as if written for her particular ability to inject warmth into acid-tongued bitterness. Reed Birney does more with less as her maybe-milquetoast (and maybe not) husband. Bert is like an iceberg – not cold, mind you, but with his essence ninety percent below the surface.

Katherine Waterston as the dreamy Harvard-grad Cora, who sees through everyone (literally, it seems) and Shane McRae as damaged son James (never Jim), who has learned not to trust the advice of stuffed animals, are both superb – singly and together. Cotter Smith and Betsy Aidem’s Dirk and Celeste circle tentatively around the others as if they know stuff the others don’t. (They do.) Looks between and among all the diners are as eloquent as any spoken words. 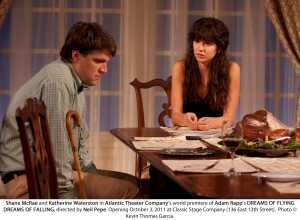 Shane McRae and Katherine Waterston are James and Cora

Then there’s the maid, played to perfection by Quincy Tyler Bernstine, who illuminates the underside of white-employer condescension. She also oversees one of the funniest (and, ahem, most realistic) sex scenes in memory.

Atlantic Theater’s own PR blurb posits that “the fate of the evening tilts toward an inevitable conclusion that promises to change the lives of all who came to the table.” It’s that inevitability, so neatly woven into the fabric of Dreams of Flying Dreams of Falling, that makes it a should-see.