Much Ado About Much

Much Ado About Nothing may not be Shakespeare’s funniest laugh-out-loud comedy, but it’s his word-wittiest. That wit resides primarily in exchanges between Beatrice and Benedick, one of the two couples whose intertwined romances unfold in the play. As headlined at Two River Theater by Kathryn Meisle and Michael Cumpsty’s Bea and Ben, Much Ado is nothing short of sublime. 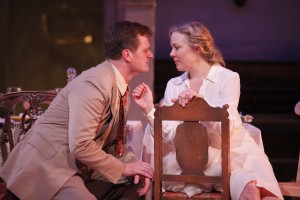 The story unfolds at the Sicilian villa of Leonato, the local Governor, where Prince Don Pedro and his half-brother Don John, whom the Prince recently defeated in battle, are among the guests. Also present are war heroes Claudio and Lord Benedick of Padua and, providing romantic symmetry, Leonardo’s daughter Hero (yes, that’s Ms. Hero) and his adopted niece Beatrice.

Hero and Claudio are sweet young things in the blush of first ardor; Beatrice and Benedick are independent 30-somethings who can get along just fine without entanglements, thank you.

Jealous of Claudio’s social position and his impending marriage to Hero, the irredeemably villainous Don John hatches a plot to discredit the bride on her wedding day. It works, but after a wise clergyman’s counsel and the bumbling town constables wringing a confession from Don John’s henchmen, justice is served.

While the central story revolves around Hero and Claudio’s circuitous route to happily-ever-after, the play has long “starred” Beatrice and Benedick, so much so that their names have served as alternate titles. The younger pair is relegated to virtual sub-plot status against the quarrelsome older one who (spoiler alert!) also end up hitched.

As competently as Annapurna Sriram and Aaron Clifton Moten play Hero and Claudio at Two River, they are eclipsed by Meisle and Cumpsty, perfectly matched as Shakespeare’s quarrelsome lovers. Their Beatrice and Benedick share a mutual attraction even as barbs fly between them. They exude charisma right from the start.

The B and B relationship has been described as “playfully caustic,” and lesser actors have been known to overplay one or the other of those seemingly contradictory qualities. Not here, where, under the watchful direction of Sam Buntrock, the jabs are not piercing; the jesting never inane.

The play is well acted up and down the line. Tom Bloom makes both Leonato’s affection for his daughter and his anguish over her supposed transgression understandable sides of the paternal coin. Sean Dugan’s Don John is just sinister enough of manner and intent for an otherwise romantic comedy. John Ahlin is over-the-top as Constable Dogberry, but then so is Dogberry.

There’s a brief gem by Connor Carew as the Friar who outlines the plan to redeem Hero, and Zeke Zaccaro does commendable double duty as Leonato’s sensible brother and as one of Dogberry’s nonsensical deputies

By now, most of Shakespeare has been set in any place on the map in any time period. Here, we’re in the original Sicily, but in the 1930s. The time shift works, partly because “just do it” hadn’t yet crept into moral values, and partly because of Mattie Ullrich’s perfectly designed costumes.

I’ve seen Michael Cumpsty as Hamlet and both Richards, II and III, at Classic Stage in New York. There may be Shakespearean actors more lauded than he, but none is better at making the plays seem like they were written last week. It’s difficult to assess intelligence from a distance, but the theater smarts of Cumpsty, Meisle and Buntrock make this a Much Ado that every high school English teacher should assign for homework. Maybe more important, they should see it themselves.