After seeing Andrea Gallo in the one-woman play Donna Orbits the Moon, I told New Jersey Rep Producers Gabor and SuzAnne Barabas that if I ever call them for Gallo’s phone number, they’ll know I’ve written a play. Later I learned that Ian August wrote Donna with her in mind. The play is good. It’s mysterious and emotionally moving, with a generous smattering of humor. Ms. Gallo is terrific. 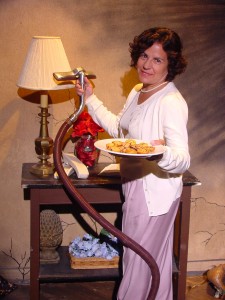 Donna is concerned about her own erratic behavior. She’s not off her rocker, but she periodically loses control of her impulses, like when she slaps a woman in the supermarket for no reason. (Her altogether sensible solution to the attendant embarrassment? Change markets.)

When she drops a steak in the kitchen, she uses it as a floor-wipe before serving it to her husband. (At least she finally cleaned behind the fridge.) Later, smashing an uncooperative vacuum cleaner against the wall prompts her daughter to suggest therapy sessions.

Sometimes, the play seems to say, the best therapy for Donna’s particular imbalance is coming to grips with whatever impairs that balance. In the course of one 80-minute act, Donna’s therapy, both professional and within herself, takes shape. Telling much more of Donna’s story would be a spoiler, so you’ll learn little more here.

Ms. Gallo, alone throughout except for the disembodied voice of Buzz Aldrin, second man to walk on the moon, holds the audience in the palm of her hands. Hands that flutter some, point some, and go to her face occasionally as if to blindly identify herself. Gallo’s face, and the ever-so-slightly lispy voice that emanates from it, are palettes upon which an infinite variety of expressions are drawn.

Donna’s family is important to her story; Gallo impersonates them all. Her husband Gil, who handles life’s ‘stuff’ differently from his wife, is especially vivid. (It’s no spoiler to reveal that different people coping with the same challenge in different ways is a theme of the play.) Then there are Donna’s concerned daughter Terry, her son Charley and her best frenemy Meryl, whom Gallo incarnates as a baritone Carol Channing. And her brief take on a four-year-old in the library is a gem.

It’s a common misconception that directors are relatively unimportant in a one-person play. The opposite is true. Marc Geller’s guidance is obvious – and invisible. (There’s probably a better way to say that, but there it is.)

The play isn’t perfect, although Ms. Gallo makes it seem so. The foreshadowing needs work, but the playwright’s choice of Buzz Aldrin to co-star in Donna’s imagination is inspired. How much easier it is to relate to the second to accomplish something special than to the first.