Shaw and Shakespeare North of the Border

Covering the Shaw Festival in the Niagara Region of Ontario and the Stratford Shakespeare Festival, 200 km west of it, is a labor of love…and publication in papers (and their web sites) in several U. S. cities near the Canadian border. Below, first of two reports on the Festivals’ 2011 seasons:

Happy Fiftieth to the Shaw Festival!

In 1962 a small group of Americans and Canadians produced eight weekend performances of George Bernard Shaw’s Don Juan in Hell and Candida in a hall of the Court House in Niagara-on-the-Lake, Ontario, Canada. From that modest beginning was born the only Theatre Festival in the world devoted to the plays of Shaw, his contemporaries, plays set in his lifetime and, since 2009, modern plays that reflect his values.

You’d think such a Company would be able to mount an outstanding production of My Fair Lady. You’d think so, and you’d be right. Playing through October, My Fair Lady is splendid. The underlying play, Shaw’s Pygmalion, has never been better served, nor have the musical numbers been better staged.

Fair Lady cemented Shaw’s tale of a coarse flower girl’s transition into an elegant lady into universal consciousness. As well as in any stage adaptation ever, the lyrics and music (Alan Jay Lerner and Frederick Loewe) complement the book (Lerner, from Shaw) and flesh out the characters, and while there’s nothing radically different here, the overall vision of director Molly Smith supports the Festival’s claim of a “fresh and innovative production.” She and choreographer Daniel Pelzig put a new slant on the proceedings without sacrificing the time and place: London, 1912.

Deborah Hay is a self-aware Eliza who envisions a life more “Loverly” than the one she has. (It is Eliza, after all, who initiates the training with Professor Higgins.) “I’m a good gurl, I am” is more defiant than plaintive, a quality that serves “Just you Wait” and “Show Me” well. And no one has ever looked lovelier in a modest nightgown (“I Could Have Danced All Night”) or in a shimmering-silver gown (the Embassy Ball).

Patrick Galligan’s forte is playing genteel Englishmen whose reserve masks their strength of character. Pickering is usually cast older than Higgins; this one is same-age. Galligan does not hold back; this fellow defends Eliza with more authority than your run-of-the-mill Pickering.

Those whom, fairly or not, have considered the Alfred P. Doolittle sub-plot as a mere Music Hall diversion, are in for a treat. The enormously girthed Neil Barclay’s Doolittle is a true co-star. Sung and danced by an ensemble rivaling anything on Broadway, “With A Little Bit Of Luck” and “Get Me To The Church On Time” are show-stoppers.

Benedict Campbell is a Henry Higgins to contend with. The character is deceptively relaxed, comfortable in any social situation, and still Eliza’s taskmaster; the actor is all that and more. Even as Higgins is heaping vitriol on Eliza, his menace takes a back seat to his charm. And the man sings most of the traditionally patter-talked numbers. “I’ve Grown Accustomed To Her Face” is, at long last, melodic.

So many moments enhance the show: Eliza giving Freddy an admiring once-over at Ascot; tin can percussion; Higgins schmoozing with the servants after the Ball; scenery and even costume changes in full view, as if Shaw himself wrote them so; and an ending that splits the difference between two extremes. These and more contribute to a Fair Lady that is more than the sum of its parts. (One even excuses the Caribbean-bird Ascot costumes. Almost.)

This once-in-a-lifetime Fair Lady is drawing fans from great distances. One couple who had come from England just for the show bought tickets on their way out for another performance later in the week.  For them, it was twice-in-a-lifetime.

My Fair Lady is not the only gem on the Festival stage. The prolific Irish playwright’s Heartbreak House is another sort of play altogether, but it’s as satisfying in its way as is the musical. (Significantly, Deborah Hay, Benedict Campbell and Patrick Galligan play principal roles in both.)

The play is described by director Christopher Newton as a “comically simple…fantasy” and by a University Professor as being “incredibly complex and puzzling.” Undeniably both, the key is to enjoy the comedy and think about the complexity later. Or don’t; it’s not required.

Mrs. Hushabye has invited a young girl, her father and her much-older fiancé for a weekend visit with the intention of breaking up the engagement. The girl is marrying for money, a situation as old as it is new. Shaw addresses that and other socio-political situations through his stand-in, Captain Shotover, Mrs. Hushabye’s father. (The names are tasty; Shotover’s other daughter is Lady Utterword.)

The ordinary concerns parallel the looming threat of World War I. That cataclysmic event isn’t mentioned until the end, when it is more than mentioned, but the clash of values, headed by a favorite Shaw target, Capitalism, is a war of its own. In unpredictable ways, true love – and even a marriage – prevails.

Designer Leslie Frankish’s imaginative Hushabye parlor is rigged like the deck of a boat, which complements the inscription that wraps around the upper walls: Voyaging Through Strange Seas of Thought: Alone. The imposing-sounding quote, from Wordsworth, not Shaw, simply means that all of us are alone in our thoughts.

At one point, the older fiancé observes “What a crazy house.” (And whose isn’t sometimes?) Heartbreak House is humanly populated. It’s witty, somewhat farcical and even, for its day, sexy. And the cast is as well-meshed an ensemble as ever strode a stage…or swabbed a deck.

Shaw’s Candida is less successful. Written as a counterpoint to Ibsen’s A Doll’s House, in which Nora slams the door on oppressive domesticity, Candida features a clergyman’s wife who is content with her station and with the unspoken knowledge that mothering her husband is the key to his, as well as her own, happiness. (Shaw himself called Candida “The Mother Play.”)

When young poet Marchbanks (Wade Bogert-O’Brien) declares undying love for Candida in rapturous verse, he and the husband clash like jealous high schoolers. Finally, the two decide to let Candida choose between them, a construct that actually works in the play, and wife/mommy Candida saves them both.

Nigel Shawn Williams is an imposing Reverend Morell, to an extent that skews the play. Described by Shaw as vigorous, genial and, yes, robust, this Rev is robust to the extreme. He’s like a footballer, and a bland one at that, more than a “genial…pleasant…orator.” Shaw, who wrote copious notes, described Marchbanks as strange, shy, effeminate, with a delicate childish voice and shrinking manner. The only thing strange about Bogert-O’Brien’s Marchbanks is that he’s none of those other things.

Claire Jullien pretty much saves the day. Her Candida is (again, as Shaw specified) well-built, well-nourished, pretty…serene…courageous…with dignity of character. Who wouldn’t love such a woman?

Few people would deny that Theatre has the power to change someone’s life. But a whole town? That’s the premise of Lennox Robinson’s re-discovered 1933 Irish play Drama at Inish, in which productions of early 20th-Century classics work their power on an entire community, and not for the better.

Lest the word “drama” in the title deter seekers of light fare, the Shaw has appended “A Comedy” to that title. The play’s original sub-title, “An Exaggeration,” is even more apt.

Every summer, the seaside town of Inish invites a comedy troupe to entertain its tourist influx. After last year’s troupe bombed, the town hired a serious theatre company to “improve the tone” by presenting the plays of Chekhov, Ibsen and Strindberg. According to the troupe’s hammy producer/director/actor, the so-called intellectual fare may “revolutionize” people’s souls, and indeed it does.

The plays are surprisingly successful, with the locals as well as the tourists, and gradually, the once happy-go-lucky Inishers are transformed. One need only know that The Cherry Orchard, A Doll’s House and Dance of Death are steeped in doom and gloom to figure out where this is going. With dire – but funny – results, the citizenry takes on the values of the plays. But wiser heads prevail, and recovery is swift. In the adept hands of director Jackie Maxwell and 13 actors whose obvious good time is contagious, Drama at Inish is exactly what its sub-titles promise: An exaggerated comedy.

The season also includes Shaw’s “On the Rocks,” J. M. Barrie’s “The Admirable Crichton,” “Cat on a Hot Tin Roof,” recent off-Broadway hits “Topdog/Underdog” and “When the Rain Stops Falling,” and a new musical about the Portuguese singer “Maria Severa.” Some shows run through October. For a complete schedule/brochure: 1-800-511-7429 or online at www.shawfest.com 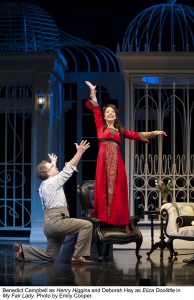