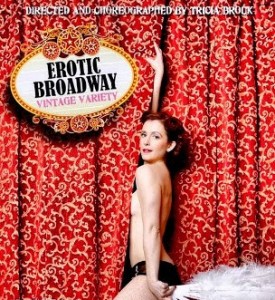 parlance, Monday night is generally “dark,” meaning that there are no performances – with rare exceptions – on that night. Wouldn’t you think somebody would take advantage of that and run on Monday?

The opening number is a slick rip-off of A Chorus Line, with clever derivative music and lyrics. (“How many hotties does he need?”) From there, the 17 talented singer-dancers (14 are women) romp through mostly-musical sketches, which range from curious to hilarious. And yes, there’s near-nudity, which highlights the naughtiness.

The virtual strip-teases feature some smart songs and routines. Three women mime “The Shower, The Dressing and The Date” to an up-tempo “Flight of the Bumblebee” in synchronized perfection. A “Who’s on First” takeoff, framed as an interview with a bawdy-house proprietor, is a knee-slapper. (Customer asks the madam “Who gets the money?” “Every penny of it,” she replies. “Who does?” he continues. “Well, she’s not doing it for free.”) Adapted by Joe Ricci, who performs the sketch with Vicki Van Tassel, it’s funny stuff indeed

Ms. Brouk, partially covered by feathered fans and little else, dances homage to Sally Rand. It’s sexy, for sure, but respectful of that iconic stripper as well. In another bit, she explores the eroticism of sweet buns (the food, the food). Here, she’s fully dressed – and even sexier.

The Triad, 158 West 72nd Street, near Broadway. Shows at 9pm on Mondays, April 25, May 23, June 20, July 18, Aug 22 and, Lord willing (or at least tolerant), into the fall and winter. Tickets ($25 & $35) and a two-minute video sample at www.eroticbroadway.com.  Seating is at cabaret tables, all with great view, with full-bar table service at reasonable prices. It’s an ideal date night or, judging by last month’s crowd, girls’ night out.