Last year Broadway’s Tony Awards removed critics from the voting rolls, leaving producers of the nominated plays among the voters. This year, the Normy Award, named for the late avid theatergoer Norman Ansorge, has added producers to award eligibility. Below, the 14th annual Normys:

The Fear No Evil Normy goes to First Avenue Playhouse producer Joe Bagnole for allowing a critic to evaluate what was essentially a dress rehearsal of Old Money when an ailing actor had been replaced at the eleventh hour. (Script-carrying Bob Mira and a priest holding three women at gunpoint made the evening worthwhile.)

Two striking musical talents share the Luminous Leading Lady Normy. Returning to the stage after a mommy-break, Deborah Dutcher was an enchanting Anna in Phoenix Production’s The King and I, and blossom-fresh Red Bank Catholic senior Jade Dibling was an Eliza Doolittle to reckon with in the school’s My Fair Lady. (Christopher Pica as Dutcher’s King and David Shirley as Dibling’s Henry Higgins were equally outstanding. They share the Lucky Leading Lads Award.) 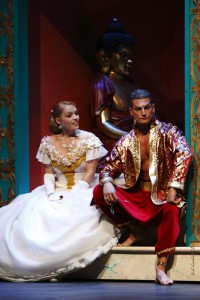 Deborah Dutcher and Christopher Pica in "The King and I"

The It’s No Secret Normy goes to Producer Pat Barry’s Spring Lake Theatre Company, which hasn’t been a secret in that community for years. (Try scoring a ticket to their annual Scrooge.) Featuring a performance by Julia DeSantis that belied her pre-teen age, The Secret Garden kept Pat’s string of sell-out houses intact.

Winners of the Pick Yourself Up and Start All Over Again Award are Debbie and Michael Schwartz, who found a new home for their Passion Players when the Eatontown Playhouse doors closed. Fittingly, the first show in their new venue, the Italian-American Memorial Association in Long Branch, was big. Make that Big, the musical version of the Tom Hanks movie.

The Schwartz’s also share the Couples That Produce Together Stay Together Award with Paul and Lori Renick, who produce, direct, design, stage-manage and/or act in Monmouth Players’ season of comedies and mysteries. Their October farce, Cash on Delivery, delivered laughs from start to finish. (Lori’s also in charge of Hospitality, the company’s outstanding dessert offerings – reason enough to stick with her!)

Holmdel Theatre Company’s Kelly Bird wins the What Goes ‘Round Comes ‘Round Normy. Appearing in Holmdel’s 1993 Godspell, she sang “Day By Day” beautifully. This past October, Kelly directed the same play with a cast whose range of age and experience exemplified Holmdel’s mission: to integrate professionals with non-pros and students in all aspects of theater. (This time around, fourteen-year old Laura Nevill sang “Day By Day” beautifully.)

There can be only one winner in the next category. For creating Brookdale’s Summer Shakespeare Ensemble; for including dozens of students and community members; for extracting Elizabethan poetry from inexperienced casts; for top-flight productions from As You Like It to Macbeth; for last summer’s outstanding Julius Caesar; and for presenting them all on Brookdale’s Great Lawn – for free – the Bringing Shakespeare To the Grasses Normy goes to teacher/producer/director John Bukovec.

To all the producers, directors, actors and crews of our student, community and professional companies: the heartfelt thanks of thousands of theatergoers and a collective 2010 Normy Award. We’ll see you – often – in 2011.